It's More Blessed to Give Than to Receive

The Synagogue, Church Of All Nations, everyone felt the presence of God, while the choir and the congregation worshiped their Creator with an open heart in the beauty of His holiness. 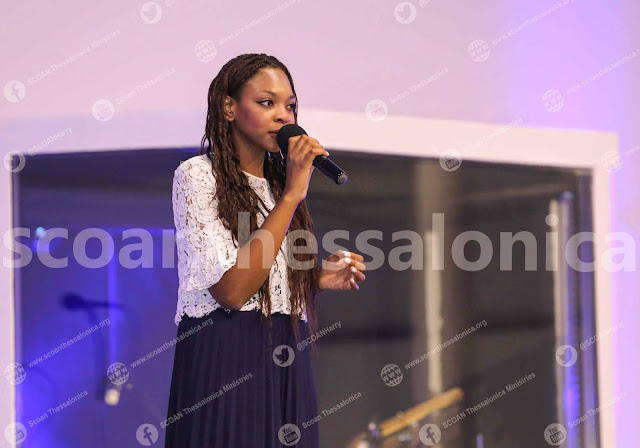 Evangelist Katerina Otamere followed with an eye-opening message entitled, “IT IS BETTER TO GIVE THAN TO RECEIVE”. She began by stating how we all want to be blessed and helped by God, yet, we are not all willing to help with the needs of others. We want to benefit from our neighbor, yet, we ourselves do not want to help someone with our life, with our love or with our works. Jesus Christ taught us in Proverbs 3:27 “Do not withhold good from those to whom it is due when it is in the power of your hand to do so.” Specifically, the evangelist explained how giving is an assignment from God Himself and if we truly have His love in us, God will help us see the problems of those around us, since love looks around to see who is in need. However, she clarified that we must be careful about how we give because if we give and expect something in return, this would be a wrongful offering that is not from God.

The evangelist continued by making clear that everyone without any exception has something to give, to offer. It is time to stop focusing on our own problems because we were blessed to bless others. Looking the other way when your brother is in trouble equals to rejecting Christ Himself. She also pointed out that whatever you make happen in the life of your neighbor, the Lord will make happen in your own life. Therefore, when we help solve someone else problems, God will be preoccupied solving ours. This is the key to our continued blessing from God! Finally, the evangelist advised and exhorted all those of us who want to be like our Heavenly Father to begin giving, because when we give, it makes us like unto God, who gives to all and receives from none. So let us use His love today, helping the needs of others because this is our assignment from God – to change lives, to change the world!

THE TRIP THAT BROUGHT HER HEALING AND DELIVERANCE

On July 21, 2019, Mrs. Olena Sharhan from Ukraine came to the Synagogue, Church Of All Nations Thessalonica, with great excitement to give glory and honor to God who did more in her life than she ever expected!

Mrs. Olena and her husband learned of this ministry through the internet. Even though they have two young children and she is also pregnant, they decided to take a two-day trip, so they may be in the presence of God, and receive an anointed touch from the man of God, Harry. Her husband began working all day so he can save up extra money for this trip. Pregnant and alone with two smaller children, Mrs. Olena stayed home to take care of them without any help. As if this was not enough she fell ill and the doctor diagnosed her with sinusitis, resulting her to have pain in her ears, gums, and a strong headache. The medication the doctor prescribed did not help her at all and also gave her a fever. In addition, Mrs. Olena did not rest even while she slept, as in her dreams she was constantly attacked by snakes, spiders, and dogs that bit her.

None of these problems stood as an obstacle to her taking this trip with faith so she can seek the presence of God. On July, 14, 2019, she took part on the prayer line, and God’s intervention was instant! In that moment every pain she had, disappeared to the point that she forgot she was taking medication! That same night she slept like a baby, as her nightmares were a thing of the past! Finally, overwhelmed with joy, she advised the congregation to serve God with all our heart and to only worship Him!

When you do not allow the situation around you determine the decisions you make, that is faith! Just as faith honors God the more, God honors faith the more!

Mr. Michel Maaijen came with his wife to the Synagogue, Church Of All Nations Thessalonica, with faith that Jesus Christ is the same today just like yesterday and would be Able to deliver him from the fear of death that shadowed every aspect of his life.

He participated on the prayer line, where Prophet Harry came to him and gave him the following prophecy, revealing the root of the fear of death that tormented him. “I’m seeing a spirit of death, dead people coming to your dreams. They want to play with you as if nothing happened, as if they are not dead. Only when you wake you realize that these people are dead and wonder what you were doing with them. You always have a fear that you will have an accident; that something bad will happen to you. Even when you want to travel by plane you are afraid that the plane will crash. That is the spirit of death! If you are not delivered, even the airplane you are in can crash. Many planes that crash today, do not crash naturally. They crash because somebody who is in it, has the spirit of death in him!”. Following the man of God prayed for him disconnecting him from every chain of death in the name of Jesus Christ!

On Sunday, July 21, 2019, Mr. Michel came to the Synagogue, Church Of All Nations Thessalonica, along with his wife to confirm the prophecy he received from the man of God. He began by describing how when he was young, in his dreams he saw dead people and animals chasing him, sucking his blood and finally killing him. Later in life, these dreams affected his marital and professional life. While he was at work, he had to climb stairs no less than twenty meters high; the fear and stress ruled over him as he continually thought that he might fall and die. Before it was time to sleep these thoughts tormented him, becoming nightmares. Even when he wanted to travel by airplane, he was afraid it might fall and he would die. Stress and worry had power over him! This spirit also stood as an obstacle of him driving a vehicle. Due to this fear, he failed to get his driver license five times because he was driving below the speed limit. Mr. Michel’s wife confirmed this whole ordeal and added that this fear also caused him to be unable to make decisions in various issues they faced. His wife also was affected by this spirit because when her husband would leave she worried for his life and was afraid to sleep at home, on her own. In every aspect of their life, they experienced limitation, pressure, and tension because of this evil spirit.

Immediately after the prayer, however, on the journey back home, they experienced the changes that their deliverance brought! Inside the plane, Mr. Michel realized that he was no longer tormented by fears of a plane crash! When they arrived and were faced with their daily lives, there was no such fear that overshadowed their lives! A new start began with freedom and joy. So, after the deliverance Mr. Michel and his wife received, they advised all those who are afraid, not to have various alternative plans, but only God’s plan! Because, He is the Way, the Truth and the Life!

Fear cannot go hand in hand with faith. Where there is fear, there is no faith! Fear stops us from making important decisions that can change our lives. Faith alone pleases God! So instead of magnifying the causes of our fears, we should arm ourselves with the thoughts of God. Meditation of God’s Word strengthens our faith and drives fear away!

The testimonies above prove that the age of miracles has not yet passed, as Jesus Christ never said goodbye. He is still Alive and continues to change people’s lives by generously giving deliverance, healing, breakthrough, and blessing.

Do you need the SCOAN Anointing water sent to your home? If yes, contact the church online store on the email to place your order. The Anointing Water is free and not for sale. Email: scoanonlinesales@gmail.com