How to live a Life free from the Traps of offences 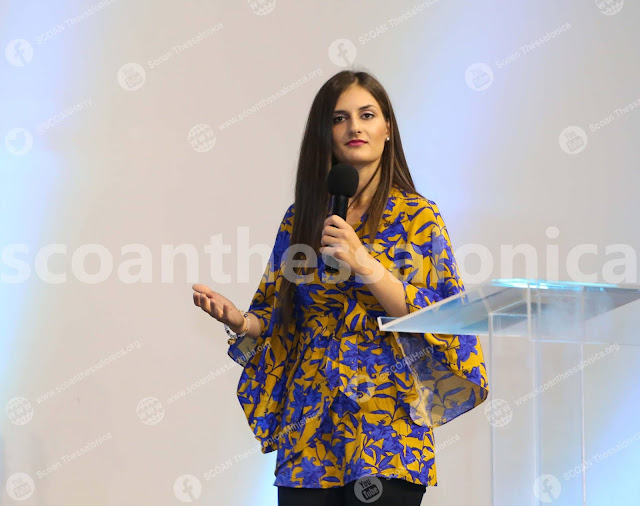 The hymns of worship at the Synagogue, Church Of All Nations, prepared the hearts of the believers and brought them closer to the miracle they had been seeking, because an atmosphere of faith makes it easier to receive your miracle!

Immediately thereafter, evangelist Maria Sachpazidou delivered the message, “DO NOT FALL INTO THE TRAP OF OFFENCE”, revealing to the attendees the key of blessing. She explained, how every day we are all confronted with insults, coming from people in our surrounding area. Offence is something that cannot be avoided in our lives, however how we handle it is what really matters. Offence is a trap of satan, but we can resist the devil by not becoming offended. By reading from Romans 9:1, “I tell the truth in Christ, I am not lying, my conscience also bearing me witness in the Holy Spirit”, the evangelist made clear that our conscience is the very instrument used to guide us by the Holy Spirit. Therefore, if we want God to guide us, we have to listen to the voice of our conscience. But if we hold offence in our heart, then our conscience is in a dead end. In continuance she read from Luke 9:51-56, giving us the example of how our Lord’s disciples became offended by the Samaritans’ behavior towards Jesus, to the extent that they even wanted to kill them. This reveals that offence itself is not deadly but harbouring or keeping it in our heart makes it deadly. When we focus on the wrong done to us, we fail to fulfil the purpose of God for our lives and we do not make progress, we remain stagnant. More specifically holding an offence against someone hinders and handicaps us from fulfilling our full potential. In order to encourage the congregation to let go of offence, the evangelist gave the key needed to receive from God by saying, “You will receive in a moment what you have been seeking for years when you let go of offence”. In closing her message she urged the attendees to be prepared to forgive and let go of their offence so they may receive the blessings of God!

On July 7, 2019, Mrs. Patricia Otu, a resident of Holland, attended the Synagogue, Church Of All Nations Thessalonica, to give all the glory to Jesus Christ, who broke the bonds she had in her life!

During the prayer line on June 30, 2019, the Spirit of God revealed the root of her problems through the man of God Harry with the following prophecy: “I’m looking at a broken house! Pray so that it will not become a curse. It must not become a curse… Because it is happening from generation to generation, there is no one in your family that does not have a broken home… Everyone is affected by this. This is something you have to pray for, it must stop. I want to help you in this battle…”. Then the man of God prayed for her, and every chain of curse broke in the name of Jesus Christ!

Mrs. Patricia returned to the Synagogue, Church Of All Nations in Thessaloniki, to confirm the prophecy she received. She shared what she had been through all these years in her life, and her family in general. Her mother had five children from five different fathers and they all died tragically, except for herself. Her mother was an alcoholic and suffered from diabetes, which eventually led to her death when they had to amputate her foot. All these events had a great effect on her emotional state because from a very young age she witnessed her family fall apart and she was unable to help them.

When the time came for her to have her own family, she married and divorced five years later, leaving her alone with a three-year-old daughter. While she had to raise her own child, she also had to take care of the children of her 5 siblings who died prematurely, which made her survival even more difficult. After she raised all the children, she decided to rebuild her life! She married for the second time in Holland but after 15 whole years, she was divorced once again. Her daughter had the same fate. While she married out of love, two years later her husband left her and their child who was just 3 months old! While Mrs. Patricia witnessed the same story repeat itself she felt disappointed and helpless. With everything she faced, her relationship with her daughter was not good at all! They had not seen each other for seven years, and for five of those months they had no communication at all.

This all lead her to make the decision to ask for the help of God because she knew that only He could reveal the root of her problems and put an end to all these unpleasant events. With tears of joy, she testified to the immediate change that God brought into her life right after the prayer! On the same day, she received a message from her daughter saying she wanted to communicate with her and that she missed her, something that she had never told her before! Now, Mrs. Patricia declares in faith that everything is finished in the name of Jesus Christ! She advised us to run to God in any situation, and not away from Him and promised to serve Him, doing everything she can to be with Him.

Victory in Christ Jesus is not for those who quit but for those who endure. “Yet in all these things we are more than conquerors through Him who loved us.” (Romans 8:37). Below, we see people from near and far that came and joined the prayer line with faith in their heart. They laid down all their needs in the hands of God, and He honored their faith!

Do you need the SCOAN Anointing water sent to your home? If yes, contact the church online store on the email to place your order. The Anointing Water is free and not for sale. Email: scoanonlinesales@gmail.com