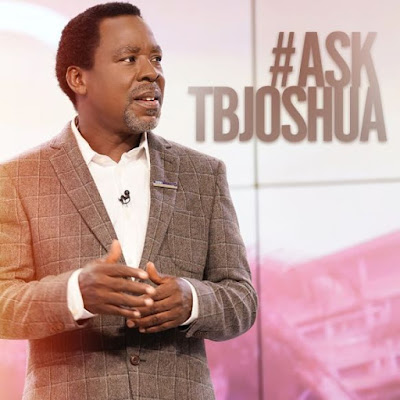 It's a fact that so many people have diverse opinions about the founder of The Synagogue Church of All Nations, Prophet Tb Joshua. But while so much has been said about the man of God, quiet a lot is not know about him. In the post we are going to take you through the Biography of the founder of our great church. So just read along to know who the man Prophet Tb Joshua really is.

Prophet Tb Joshua full name is - Temitope Balogun Joshua and he was born on June 12, 1963 to a humble family in Akoko, Ondo States. Financial difficulties impeded the completion of his secondary education at St. Stephen’s Anglican Primary School, as his parents found it difficult to pay his fees. Nevertheless, his love for the Bible and the Christian life made him stand out among his equals and also earned him the name ‘small pastor’

It was a matter of fate for the man of God whose efforts to venture into the contemporary life failed several times. One of these occasions was when his aspirations to join the military was flawed by a mysterious engine breakdown on his way to an interview, at the Nigerian Defence Academy, Kaduna.

As several reports, as well as witnesses, will have it, strange things happened during the time of the birth of the prophet. One of these events was that unlike the normal 9-month pregnancy, TB Joshua’s mother carried him for 15 months in her womb. As an infant, he was said to have had a fair share of mysterious and evil attacks which he always ended up overcoming.

When he left his secondary school, he did some menial jobs like disposing and recycling chicken waste for farming purposes. Not being in school also gave him time to engage in Christian activities like organizing Bible studies for children. He, however, enrolled in evening school later on.

SYNAGOGUE CHURCH OF ALL NATIONS

Pastor TB Joshua enjoy massive followership worldwide, with his ministry; The Synagogue, Church of All Nations having branches in Nigeria, Ghana, London, Greece and many other parts of the world. This ministry he explains, was a directive from God who anointed him. The church which started with a few members has grown to a large Christian empire, with over 15,000 members attending weekly Sunday church service. The popularity of this church is largely attributed to the large population of Nigerians and Ghanaians worldwide.

The SCOAN Ministry owns a television station. The pastor owns and runs a TV station headquartered in Lagos – Emmanuel TV, which is a Christian station that operates twenty-four hours. The station focuses primarily on the charitable works of the pastor and his SCOAN ministry, as well as their programmes.

TB Joshua is the type who keeps his personal life private. However, the public is well aware that the prophet is happily married to his wife, Evelyn Joshua, with whom he has three children. Despite the controversies surrounding the prophet, his kids are number one fans of their father’s ministry, as well as his activities. Prophet Tb Joshua and wife (Evelyn Joshua) has 3 kids

Tb Joshua SCOAN Anointing Water is what holds the SCOAN family together, literally speaking. According to the Church’s faithful, it is believed that the water has powers to cure a myriad of diseases and ailments – from spiritual to physical. Of late, the pastor claims that the anointing water is ‘The Blood Of Jesus Christ’ in a bottle. These healing claim has further boosted the popularity of the water causing a mad rush for it during church programmes.

The Emmanuel TV team has already started the distribution of the New Anointing Water to members of the church that are unable to visit the church here in Nigeria. To apply for your own Morning Water contact the church email: scoanonlinesales@gmail.com